Appreciating the little things and confirming the inherent goodness in people, one observed random act of kindness at a time…. 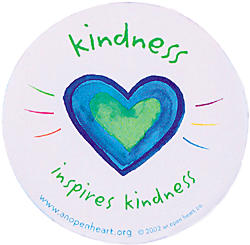 ONE: When I was at the gym last week, after I had finished the class I was doing, the guy behind me randomly came up to both me and the person beside me, grabbed our weights, and put them back for us – unexpected, unessecary, but definitely appreciated.

TWO: A fellow Leadership Development friend of mines company is hosting a chat around leadership and people potential. He sent the invitation to me the day it was ready to go out and made of point of saying that I needed to be there – unexpected but definitely appreciated.

THREE: I was at a wedding last friday night and knowing that as the night progressed all the girls would be kicking themselves for wearing high heels, a friend of mine brought 3 extra pairs of flip flops for others  to use – unexpected but definitely appreciated I’m sure.

FOUR: When I was grocery shopping last week, there were 4 people in line.  The person who was next to go throug 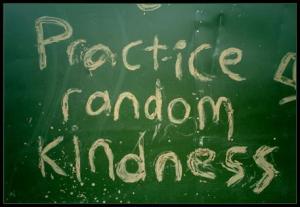 h the check out had about 10 items and the person right behind them had 2. The person who had 10 items offered for the person behind them to go ahead because they had less items. Awesome.

FIVE: Me and a friend were out for a walk last week and we were taking some pictures down by the water. We wanted to get one of us together but were clearly struggling to get a good one where we were centered,where half the picture wasn’t taken up by the arm holding the camera (ladies you know the one!) and where we could actually get some of the background in the picture also.  A random person stopped and offered to take a picture of the two of us together. Thanks! 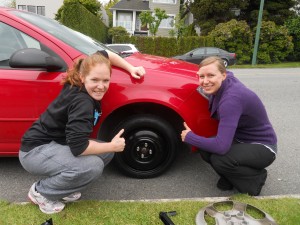 SIX: Last weekend on our way to Alumni Weekend at UBC, my friends car got a flat tire. We pulled over and started to change the tire ourselves. A guy out on a run stopped and offered to help us. We didn’t want to interupt his run – plus we had it taken care of 😉  so we kindly declined, but it was unexpected and very much appreciated.

The little things are the big things…true story.